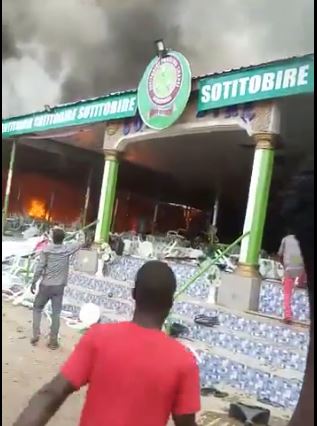 Sotitobire Miracle Centre, the church where a one-year-old boy mysteriously went missing has been set on fire.

It is yet to be confirmed if the corpse of the boy, Gold Kolawole was seen at the church, but there are emerging rumors that such could be likely.

Baby Kolawole, God was declared missing one month ago during a church service after his mother dropped him at the children section.

The Founder of the church, Prophet Alfa Babatunde has spent some days in custody of the DSS following his arrest by the secret police.

He was arrested based on a petition written by the parents of the missing child.

See the video below:-

Don’t Compare Him With Anyone, Olamide Is A Different Breed, Mr Eazi Celebrates Rapper