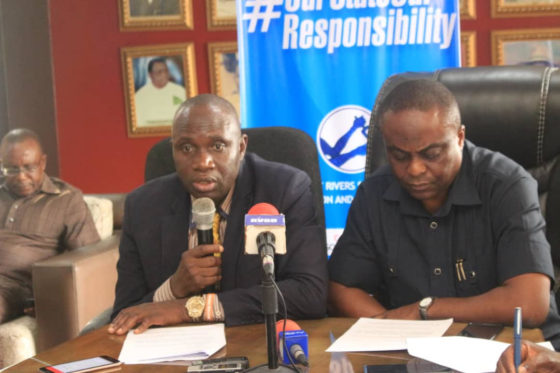 Rivers State Government has stated that its investments in education have yielded quality results and improvements in the sector since May 29, 2015.

In a joint briefing, the Rivers State Commissioner for Education, Professor Kaniye Ebeku and Information and Communication Commissioner, Paulinus Nsirim noted that Governor Wike has been outstanding in reviving the education sector.

They said: “Governor Nyesom Wike, former Minister of State for Education, came into office as Rivers State Governor with a clear vision on the education sector. At his first inauguration on 29 May 2015, he declared that he seeks to provide accessible, quality and affordable education for all in the State. Nearly five years on the seat, he is walking his talk. In this press briefing, we provide you snippets of his giant strides in the education sector:

” Within 100 days in office, he completed and furnished the Faculty of Law of the Rivers State University which had been abandoned by successive governments since the 1990s.

“He further established a Medical School in the Rivers State University, which had been without medical school since the University was established in 1980. A befitting building was speedily completed and commissioned by him.

Moreover, the school has received accreditation from the National Universities Commission (NUC) to run several medical programmes. To consolidate this, the Braithwaite Memorial Hospital has been upgraded and equipped to a standard teaching hospital.

“Within the Rivers State University Campus, several departmental buildings have been completed and others are still ongoing. You will find similar infrastructural developments in other tertiary institutions of the State.”

They pointed out that the annual Rivers results and placement in WAEC show the extent of the success recorded by the Wike administration.

“The state in the last five years has maintained first four in WAEC Ranking for 36 States including Abuja, which shows sustained growth in the education sector

They are as follows:

“Shortly, the State Government is making arrangements to implement the state law on the teaching of indigenous languages in the State Schools. This important aspect of education has been ignored by the previous administration, but Governor Wike recognizes that indigenous language been part of our culture should not be allowed to die.”

They stated: “At the basic and secondary school levels, the giant strides of Governor Wike are clearly manifest. The reconstruction and furnishing of primary and junior secondary schools in the State under the auspices of the State Universal Basic Education Board (SUBEB).

“Furthermore: 100 medical students of Rivers State origin to enjoy State scholarship at Pamo University annually for five years; All basic school teachers across the 23 LGAs in the State were given a one-month capacity-training in August 2019;

WIZKID FANS!! This Kid Said He Literally Looks Like Wizkid, Could This Be True? (Check Photo)

LASTMA Have Been Sent To Make An Attempt On My Life.”- Pastor Cries Out Over Impounded Vehicle