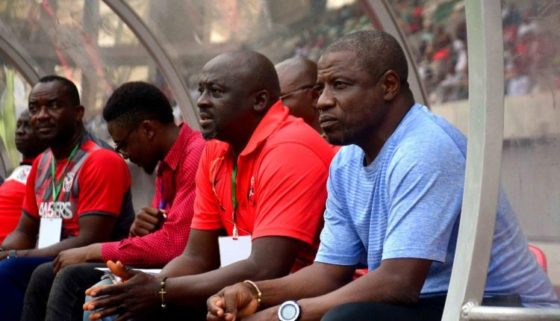 After succumbing to a third home defeat of the season, this time to Akwa United on Sunday, Rangers head coach Salisu Yusuf has attributed the defeat to the absence of key players through injuries.

Yusuf who spoke to www.npfl.ng after the 2-1 defeat to Akwa United lamented at the defending of his team especially the goals.

“We gave away two soft goals today (on Sunday) which happens from time to time in football. We were also unlucky especially with the match at 1-1. We had the chance to score but we missed it. However, I must commend Akwa United because they worked very hard.

“We have some regular players that are injured and in a match like this we needed their qualities. We hope to have them back into the team for the next game.

So far managing the injuries has been tough because we have had to rotate the squad to keep the available players fresh. We are really hoping that the injured players return,” Yusuf told www.npfl.ng.

However, the Super Eagles assistant coach has urged his team to get over the defeat to Akwa United. According to Salisu, the team will keep fighting till the end of the season and push to get a continental spot.

“We will continue to work hard and keep fighting. We cannot afford to lose concentration now. As regards the continental spots, I think we need to focus on winning as much matches as possible.”

Ndifreke Effiong and Akarandut Orok scored for Kennedy Boboye’s men to secure the first-ever victory for the Promise Keepers at the Cathedral with Kenechukwu Agu scoring for Rangers.

The defeat also ended Rangers run of nine matches without a defeat. The Flying Antelopes will be back in action on Wednesday when they face Kano Pillars in a rescheduled fixture at the Nnamdi Azikiwe Stadium, Enugu.

Impossible to predict direction outbreak will take — WHO