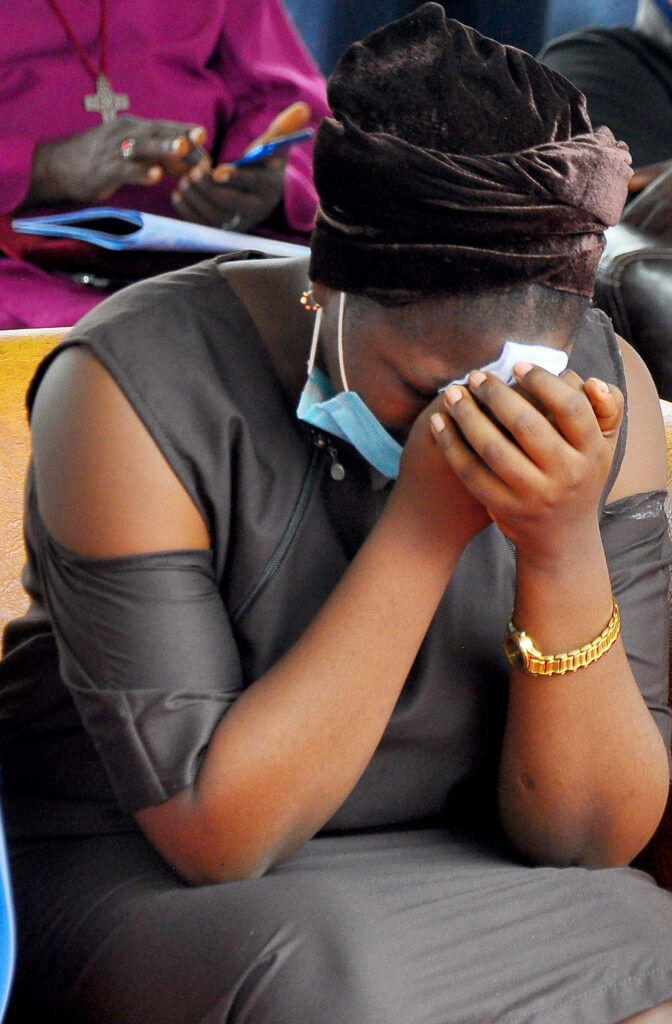 The remains of Nigeria’s first female combat helicopter pilot, Tolulope Arotile, was on Thursday buried with Nigeria’s national and military colours and a 22 gun salute amidst tributes at the National Military Cemetery in Abuja.

The remains were lowered into the grave at exactly 11.05 am in the presence of top brass of the military high command led by the Chief of Defence Staff, General Gabriel Olonisakin.

She died from severe injuries following a road traffic accident at the NAF base in Kaduna, the Air Force has said.

The vehicle that hit and killed her, a KIA Sorento SUV was driven by a former secondary school classmate who, in the process of reversing his car to give her a lift knocked down the deceased and infliictted severe head injuries of her.

The ceremony witnessed the lowering of her casket into the grave by her Coursemates, the firing of a 21 gun salute and laying of wreaths in her honour by dignitaries, her family and a representative of her Coursemates.

In a sermon and prayer session, Rev (Group Captain) Dogo Gani quoted Isiah and Revelations in the Bible noting that it is only the Lord that can comfort the Arotile family, the Nigerian Airforce and the nation over ‘this huge loss’.

“Except you Lord, no one can comfort your children because taking our sister at the prime of her life with so much good to offer our nation is a difficult thing for us to comprehend. It is very regrettable that compassionate people, givers are dying and those that are alive are the drug addicts, the bandits, kidnappers and terrorists” he said.

Emphasizing that when good people, young talents like Flying Officer Arotile who was born with the passion to set the society free from criminal elements pass on, It is difficult to fill the vacancy left by such a patriotic and committed officer, Rev Gani said, “Arotile was the Deborah of our time ready to fight evil and wickedness. Evil is still thriving, wickedness in on the in tease but at his appointed time, God will say enough is enough and take out of these challenges.

In a tribute on behalf of the Arotile Family, Mrs Damilola Adegboye appreciated God for gong the Arotile family, Flying Officer Tolulope as a daughter, a sister and a friend.

She said Tolulope was a very prayerful person noting that apart from her work, she loved God. She was determined, hardworking, and extremely focussed in anything she set her mind on.

In his address, the Chief of Air Staff, Air Marshal Sadique Abubakar described late Flying Officer Arotile as a ‘National Heroine’ saying, “Even at this moment, the Nigerian Airforce is still in palpable shock and loss as to why this had to happen our service.

“As a service, we had so much expectation for Tolu which she was already living up to with ease. She contributed immensely to the decimation of enemies of our nation. Her death has really affected us in one way or the other”, the CAS said.

To the Family of the late Flying Officer, he said, “There can be no better consolation for Tolulope Arotile than the knowledge that the nation griefs with you for the loss of such a fantastic and committed patriot. Thank you, Tolu for adding so much value to the Nigerian Airforce and the nation at large”.

Before her death at the age of 24, Flying Officer Arotile who was born on 23rd December 1995 had logged 400 hours flight in combating armed bandits and other criminal elements in Operation Gama Aiki in the North West.

See photos from the burial of Tolulope Arotile:

All photos were taken by YOMI ADESHIDA