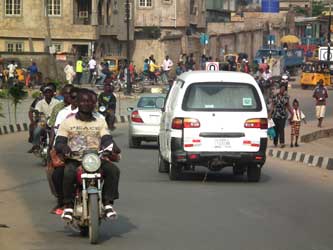 THEChartered   Institute of Logistics and Transport, CILT, has commended the Lagos State Government for banning the use of motorcycles popularly referred to as ‘Okada’ as a means of transportation, saying that it was a time bomb waiting to explode.

Speaking to Vanguard Maritime Report, Deputy President of the Institute, Dr. Alba Igwe, said the ban was not only for transportation reasons but also for security reasons noting that most of the riders were people with no proper identification, a development that was a threat to people of the state.
Igwe also said that when people without proper means of identification are in the same community, it makes the community vulnerable to all sorts of criminality in the society.

He explained that beyond the ban government should come up with a strategy to bridge the transport gap created by the decision.
He stated: “Beyond the Okada ban, what do we do to address the gaps because the Okada was a child of necessity as both big and small people used it to meet urgent transportation needs.

“While we commend the State Government for the ban we also call on them to seek a comprehensive strategy to fill the gap.

“The ban was not just for transport reasons but security reasons because the operators had no identity and they were increasing in numbers and we do not know where they were coming from, and so it was becoming a time bomb for us.

“When you have people who do not have identity, then you are vulnerable.”

WIZKID FANS!! This Kid Said He Literally Looks Like Wizkid, Could This Be True? (Check Photo)