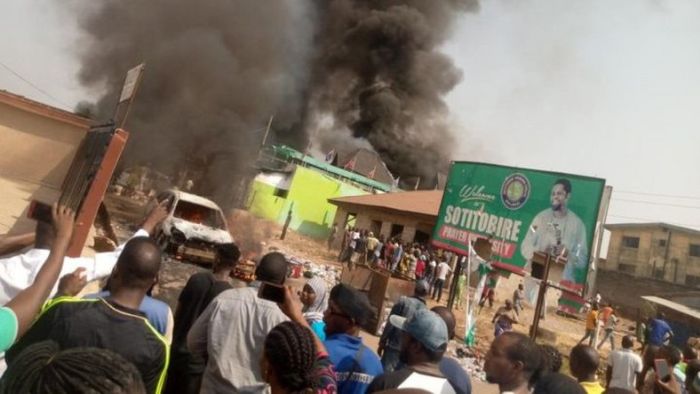 Three persons have been confirmed dead during the Wednesday, December 18, 2019, attack on Sotitobire Praising Chapel, a popular church in the Akure area of the state.

Besides the deceased, other persons, according to Punch, sustained varying degrees of injury when the youths set the church ablaze.

Properties including vehicles purportedly belonging to the church, were also set on fire by the irate youths.

It was gathered that one of the deceased was a policeman, whose identity had not been ascertained.

“Since the day the boy went missing, people had observed that the police were not doing any serious investigation on the matter. But when the youth in the area saw that a programme going on in the church on Wednesday, they went there to challenge the worshipers.

“The worshippers resisted the youth, then a fight broke out and the policemen guarding the church attacked the protesters. The action of the police infuriated the youth and residents of the area, who mobilised more people and set the church and its belongings ablaze,” an eyewitness was quoted as saying.

According to the eyewitness, while the protest was ongoing, a team of policemen had arrived the scene and started shooting indiscriminately. And it was during this process that stray bullets hit two of the youths, who died on the spot.

Journalists were also attacked by the worshipers, who destroyed their cameras and phones.

The youths reportedly set the church ablaze after the corpse of a one-year-old boy declared missing was allegedly exhumed from the altar.

Nothing Will Ever Attract Me To APC – Raymond Dokpesi