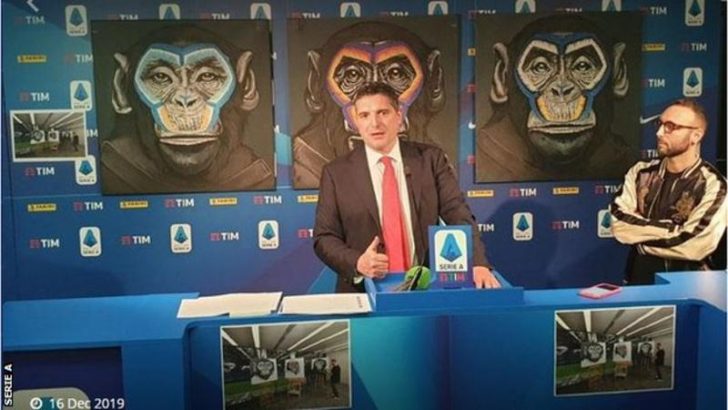 Serie A has apologised after imagery of monkeys was used in artwork for an anti-racism campaign.

The league received heavy criticism from Italian clubs AC Milan and Roma as well as anti-discrimination organisations for the posters.

“I realised it was inappropriate,” said the league’s chief executive Luigi De Siervo in a statement.

Artist Simone Fugazzotto had defended his creation by saying “we are all monkeys”.

The ‘No To Racism’ posters show three monkeys with painted faces and it remains to be seen whether they will be displayed at Serie A headquarters in Milan as scheduled.

Milan said they “strongly disagree” with the use of monkeys, while Roma expressed their “surprise”, adding: “We understand the league wants to tackle racism but we don’t believe this is the right way to do it.”

Anti-discriminatory body Fare said it was left “speechless” and the campaign looked like a “sick joke”, while Kick It Out added the use of monkeys was “completely inappropriate”.

Fayemi: 2020 ‘II be tougher for rapists, Child traffickers in Ekiti