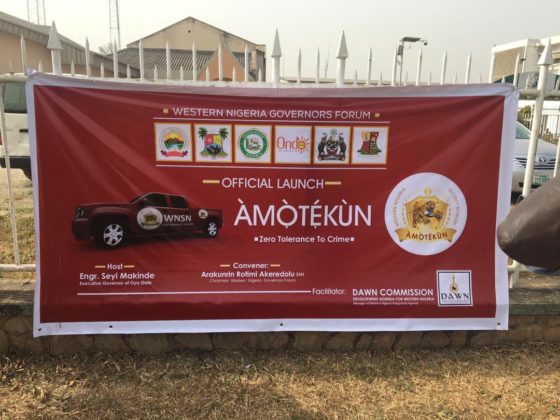 A former governor of Ogun State, Otunba Gbenga Daniel has thrown his weight behind the Western Nigeria Security Network initiative codenamed: ‘Operation Amotekun’ which was unanimously launched by the six governors of the southwest region.

He made this known on Tuesday, while on a courtesy call to Governor Seyi Makinde of Oyo State in his office.

The former governor described Operation Amotekun as the response of the people of the southwest region to the current security challenges bedevilling the country, ranging from insurgency, banditry, kidnappings and farmers-herders clashes.

His words: “Amotekun is the response of our people in the southwest to the various security challenges that we do have nationwide.”

“When you look at what has happened and what is happening, the experiences of our people, I think this security outfit called Amotekun is required.

“As a matter of fact, it should have happened years back. I am happy that this initiative has come and you can be rest assured that it has all our support, especially in the southwest,” Otunba Daniel posited.

Speaking on the inauguration of park managers initiated in the state, Otunba Daniel lauded Governor Makinde for the step taken to bring sanity to the scourge of parks management in the state, adding that the initiative would enhance professionalism in the park management scheme.

“It is a very wonderful idea. I remember when I was a governor too, I set up what we called parks and garages committee and we tried to ensure that they professionalise what is happening in our parks and garages.”

“I think it is a laudable idea. And I want to plead with our people to support it. They will turn around all our parks and they will bring sanity to the parks. It is a wonderful idea,” he opined.

When the former governor was asked if he has returned to the Peoples Democratic Party (PDP), Otunba Daniel said he would make his decision known at the appropriate time.

Septuagenarian, three others docked over alleged malicious damage of property