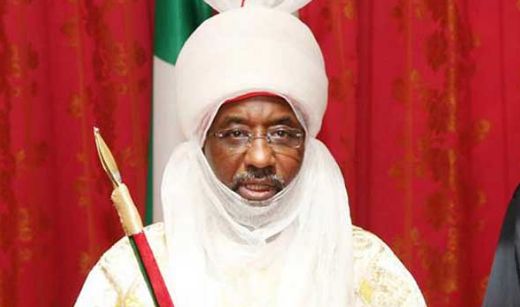 The Emir of Kano, Sanusi Lamido Sanusi ll, on Monday said no leader in Northern Nigeria can afford to be happy with the current situation in the region today.

He said nobody should be happy with about 87 percent of poverty in Nigeria being in the north. The emir, who made the remarks while speaking at the 60 birthday of Kaduna State Governor, Nasir El-rufai, said he was not happy with the situations in the region. Emir Sanusi said if the North does not change by tackling some of its social problems, it will destroy itself.

You can’t be happy with political thuggery. You can’t be happy with all the issues; the Almajiri problem that we have. “We have been saying this for 20 to 30 years. If the North does not change, the North will destroy itself. The country is moving on. Quota system that everybody talks about must have a sunset clause. “So, we wish Nasir a happy birthday, but we do not want him to be happy as a leader. Because you are happy when you think you have reached a state of delivering and taking your people to where you want them to be,” he said.

The emir added that with ‎the condition of Northern Nigeria, it’s almost correct to say that if a governor in the North or a leader in the North are seen as normal in the sense that they continue to do what their predecessors have been doing then, then there is something wrong with them because they are part of the problem. Emir Sanusi noted that the real change in the north will come from those who are considered mad people because when you look around and say if this is the way people have been doing things, and this is where they have ended up, maybe there is the need to do things differently. Also speaking at the event, the ‎Senate President, Ahmed Lawan, said Nigeria is at crossroad. He urged northern leaders to work hard to tackle insecurity in the region.

He added that kidnapping, banditry, assassination and Boko Haram remain major challenges in the region. He commended Governor Nasir El-rufai ‎for all the good work done in the state, describing him as an asset to Nigeria and humanity.

Why We Went To South Africa Despite The Xenophobic Attacks – Fayemi, Ezekwesili, Sanusi And Others E…

Buhari: My Government Will Rid Nigeria Of Bandits, Terrorists, Criminals

LET’S TALK! Are These The Reasons Some Nigerians Don’t Watch Nollywood Movies?